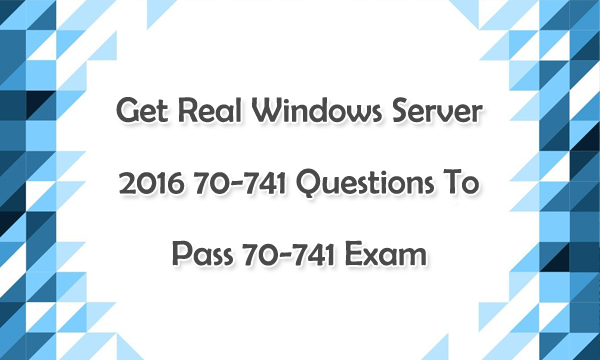 70-740 exam focuses primarily on the installation, storage, and compute features and functionality available in Windows Server 2016.

Microsoft 70-741 exam focuses on the networking features and functionality available in Windows Server 2016.

70-742 exam focuses on the identity functionality in Windows Server 2016.

Additionally, there are three other exams for Windows Server 2016 certification.

When take 70-741 Networking with Windows Server 2016 exam, candidates should have related skills and knowledge:

· Candidates should have familiarity with implementing and managing DNS, DHCP, and IPAM, as well as deploying remote access solutions such as VPN and RADIUS.
· Candidates should have experience managing DFS and branch cache solutions, configuring high performance network features and functionality, and implementing Software Defined Networking (SDN) solutions such as Hyper-V Network Virtualization (HNV) and Network Controller.

70-741 exam measures your ability to accomplish the technical tasks listed below:

You have a virtual machine named VM1 that runs Windows Server 2016, VM1 hosts a service that requires high network throughput.
VM1 has a virtual network adapter that connects to a Hyper-V switch named vSwitch1. vSwitch1 has one network adapter. The network adapter supports Remote Direct Memory Access (RDMA), the single root I/O virtualization (SR-IOV) interface, Quality of Service? (QoS), and Receive Side Scaling (RSS).
You need to ensure that the traffic from VM1 can be processed by multiple networking processors.
Which Windows PowerShell command should you run on the host of VM1?
A. Set-NetAdapterRss
B. Set-NetAdapterRdma
C. Set-NetAdapterQos
D. Set-NetAdapterSriov
Answer: A

Your network contains an Active directory forest named contoso.com. The forest has a Distributed File System (DFS) namespace named \\contoso.com\namespace1.
The domain contains a file server named Server1 that runs Windows Server 2016.
You create a folder named Folder1 on Server1.
You need to use Folder1 as a target for Namespace1.
Which two cmdlets should you use? Each correct answer presents part of the solution.
NOTE: Each correct selection is worth one point.
A. New-DfsnFolderTarget
B. Install-WindowsFeature
C. Grant-DfsnAccess
D. New-DfsnFolder
E. New-SmbShare
Answer: A,C

You have servers named Server1 and DHCP1. Both servers run Windows Server 2016. DHCP1 contains an IPv4 scope named Scope1.
You have 1,000 client computers. You need to configure Server1 to lease IP addresses for Scope1. The solution must ensure that Server1 is used to respond to up to 30 percent of the DHCP client requests only.
You install the DHCP Server server role on Server1.
What should you do next?
A. From the DHCP console, run the Configure Failover wizard.
B. From Server Manager, install the Network Load Balancing feature.
C. From Server Manager, install the Failover Clustering feature.
D. From the DHCP console, create a superscope.
Answer: A

You have a server named Server1 that runs Windows Server 2016.
Server1 has two network cards. One network card connects to your internal network and the other network card connects to the Internet. You plan to use Server1 to provide Internet connectivity for client computers on the internal
network. You need to configure Server1 as a network address translation (NAT) server.
Which server role or role service should you install on Server1 first?
A. Network Controller
B. Web Application Proxy
C. Routing
D. DirectAccess and VPN (RAS)
Answer: C

You have multiple servers that run Windows Server 2016 and are configured as VPN servers. You deploy a server named NPS1 that has Network Policy Server (NPS) installed. You need to configure NPS1 to accept authentication requests from the VPN servers.
What should you configure on NPS1?
A. From RADIUS Clients and Servers, add a remote RADIUS server group.
B. From Policies, add a connection request policy.
C. From Policies, add a network policy.
D. From RADIUS Clients and Servers, add RADIUS clients.
Answer: D

You are deploying a small network that has 30 client computers. The network uses the 192.168.1.0/24 address space. All computers obtain IP configurations from a DHCP server named Server1.
You install a server named Server2 that runs Windows Server 2016. Server2 has two network adapters named internal and Internet. Internet connects to an Internet service provider (ISP) and obtains the 131.107.0.10 IP address. Internal connects to the internal network and is configured to use the 192.168.1.250 IP address.
You need to provide Internet connectivity for the client computers.
What should you do?
A. On Server2, select the Internet and Internal network adapters and bridge the connections. From the DHCP console on Server1, authorize Server2.
B. On Server1, stop the DHCP server. On the Internal network adapter on Server 2, enable Internet Connection Sharing (ICS).
C. On Server2 run the New-NetNat –Name NAT1 -InternalIPInterfaceAddressPrefix 192.168.1.0/24 cmdlet. Configure Server1 to provide the 003 Router option of 131.107.0.10.
D. Install the Routing role service on Server2 and configure the NAT routing protocol. Configure Server1 to provide the 003 Router option of 192.168.1.250.
Answer: C