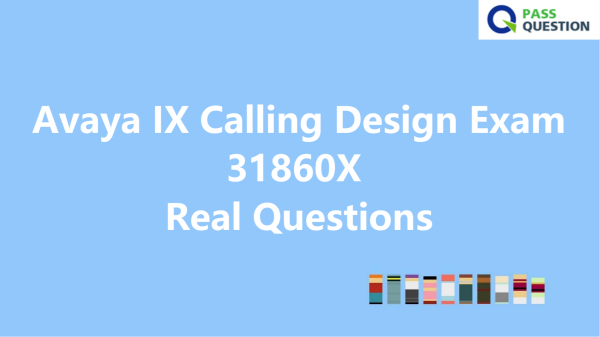 On 10 January 2020 five new Avaya Certified Design Specialists (ACDS) become available and which use this new format of not requiring a prerequisite credential. The new ACDS Certifications come along with new courseware and testing reflecting Avaya's Branding approach.

The 31860X exam questions are extremely easy to access as they are available on PassQuestion. The students for the exam can utilize the 31860X dumps for a repeated number of times with the same consistent performance. In this way the candidates can prepare themselves for the Avaya 31860X certification exam in an easy and simple way.the 31860X practice exam questions will provide the candidates with the actual 31860X exam format and facilitate them to test their skills in the real Avaya 31860X exam environment. This practice will enable the IT students to pass out the Avaya IX Calling Design 31860X exam in the very first attempt.

1.You are trying to determine how many Basic and Mainstream licenses are needed to support a proposal for Avaya IX Messaging.
Which feature requires a Mainstream license?
A. Multiple greetings
B. Full synchronization with 0365 email applications
C. Distribution lists
D. Multiple Telephone User Interfaces (TUIs)
Answer: C

2.You have a customer who requires both SIP Trunking and Remote Workers. After examining the features needed overall, you have determined that 700 Core Suite licenses are required. You still need to quote SBCE licenses, in addition to the entitlements included with Core Suite licenses, to support a total of 120 PSTN SIP trunks and 330 remote workers. The customer has agreed to a 3 remote worker users to 1 session access basis.
How many additional standard and advanced a la carte SBCE licenses are needed? (Choose two.)
A. 30 SBCE Standard Licenses
B. 20 SBCE Standard Licenses
C. 10 SBCE Advanced Licenses
D. 20 SBCE Advanced Licenses
Answer: BC